Remain myself or adapt? 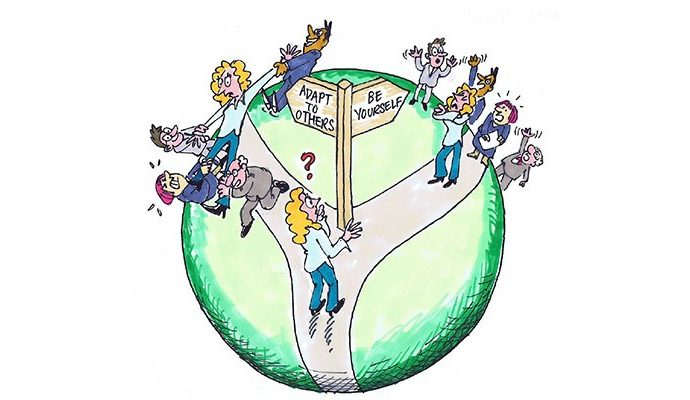 I recently observed a German manager who said the following to his mixed US and Italian team:

“It’s typical where I was brought up in Germany to be clear & direct in giving feedback. People don’t take things personally and it helps to put things on the table fast and deal with the problem at hand objectively. In addition, we Germans tend to focus on what went wrong, rather than praising when people do well – we see this as ‘empty words’.

It’s not that we want to be negative; it’s just that people simply expect everyone to do their job well, with no fuss. However, I see how giving feedback like this could appear a bit pushy here in Italy and, for some of our US colleagues, a lack of positive feedback can make me seem ungrateful for your hard work. I just thought you need to know where I’m coming from, so my intentions are clear.”

A basic challenge for everyone in a global organisation is to find the right balance between being yourself and adapting to culturally different others. Too much emphasis on being yourself and you risk being misunderstood by colleagues in other countries, even with the best of intentions. On the other hand, by adapting to others, you risk losing your authenticity.

One way to stay authentic, but also to show sensitivity and respect, is to ‘frame’ your own preferred approach.

This approach taken by the German manager above is smart because he expresses his own cultural preferences, explaining the value in his home context of doing it this way. He also shows sensitivity by saying how he thinks his own style might be perceived from other cultural points of view. His team appreciated this ability to make his intentions clear and quickly accepted his feedback style in the spirit in which it was intended. It was different but now made sense.

works particularly well for those who choose not to adapt to the approach of local colleagues (‘When in Rome…), but need to ensure that their approach makes sense. In Tco International we develop this as part of our F.A.R. model (Framing, Adapting & Reconciling) in training managers to ‘expose their intentions’.

Making sense of others’ behavior (and ensuring our own makes sense to others) is a prerequisite to managing across cultures. In fact, one of the roles of international managers is to become an organizational ‘sense maker’ – ensuring that different ‘normals’ are understood, respected and valued.

This is particularly true when dealing with the positive opposite of the qualities we value in our ‘tribe’. For example, if the shared behavior in one tribe is agility and that of the other tribe is bringing structure then, particularly under stress, we tend to revert to an excess of our behavior – to compensate. The agile team member appears inconsistent; the structured member appears rigid.

Daniel Ofman’s Core Quadrant process is an excellent way to get access to your default approach which colors your leadership style. Using your quadrant you can then work through how your natural style may be perceived by others and how you may be allergic to behaviors which are simply an excess of what you need yourself to be a balanced manager. The same process can be done with Cultural Quadrants (the topic of a future blog here).

Framing to make sense of yourself to others means that colleagues not only know what you want from them, but also understand why you are asking it in that way. Investing in explaining why is part of the ‘slow is often fast’ aspect of good practice in managing across cultures.